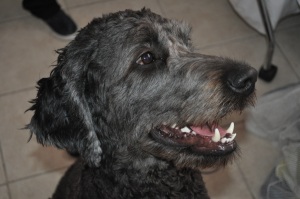 Our Golden Doodle, Fred, is so sweet.  He loves our kids and will play endless fetch with any slobbery mud ball around.  He will also play tag with the kids, and hide n seek.  That’s always fun to watch because Fred will only “hide” for about 30 seconds max before he runs after the seeker. This, of course, is the point for the kids and they wait for him while laughing, running and giggling.

Golden Doodles are, or at least this one is, very attached to his family.  Though he doesn’t tear and chew things up after we leave, he does pull things outside that make noise: Bags of chips, paper bags, noisy wrappers, etc.  He drags things outside and then sucks on them but doesn’t ruin them, per say.  The slobbery Protein Bars, still in their wrappers, which seem untouched at first glance are not chewed on, but are very wet.  Yum.

He’s still learning his manners, but for the most part, Fred is a good boy.  For his first 3 years, we’ve learned a few things NOT to do:

1. Don’t Leave Steaks Ready to be Grilled    Yup, you guessed it.  4, yes, 4 nice steaks, sitting on the counter, on a plate, all seasoned and ready for the grill; we walk to the front yard to say “hi” to a neighbor, and Fred quietly jumped UP ON THE COUNTER 4 TIMES, to gingerly move the steaks one by one outside.  There were still pieces of steak by his tree when I got there, with which he got slapped. John was seriously considering dog ownership that night. But really, it was our fault for setting up a situation where he wouldn’t be a dog if he at least didn’t TRY.  He’d be in the dog hall of shame…”you mean you didn’t even TRY to get the meat? What kind of dog are you?”

2. Don’t use the hose in the mud before running inside     One would hope that common sense would prevail, but, what can I say.  Clean floors, clean dog and kids, “let’s get a drink from the hose” type of idea from the kids which I think I hear as I’m putting away laundry, mopping the floor, putting away dishes, when that idea slowly goes from lingering in my brain to “WHAT???”, but by that time, it’s WAY too late and all three with half the mud in the back yard are giggling and running through the house, plastering my floors, carpet, kids, furniture and TV.  John was overjoyed.  I’m kidding.  And the kids learned to mop with towels.

3.  Don’t play tag or fetch on wooden floors      This is a bit more serious because sliding on a wooden floor was the cause of a broken back in my beloved “Rigs”, our dog before Fred.  Please resist the urge to go in circles around the house or throw the ball where there is that possibility.

4.  Don’t leave Fred in the car while he can see us     A $500 mistake. Ouch. Yes, $500…to replace the passenger seat belt in my fairly new Honda Odyssey which Fred chewed through twice in 10 minutes. He’s usually fine in the car, but we were at soccer practice, I am coaching, so I don’t have much attention for him. Because he’s bouncy and excited, we put him back in the car which is 20 feet away.  I proceeded with practice, ignoring his barking which stopped, so I was proud of him for calming down…until I got to the car.  Again, John was overjoyed.  He actually tried to “Staple” the seat belt back together, to make me feel better, but thank our lucky stars that the seat belt was cut in half in 2 places, so the remaining pieces wouldn’t reach each other.  “Hi officer, yes, this is the newest version of safety in the Cummings world…stapled seat belts.” Fred is still banned from alone time in the car…

I’ll keep adding to this list… and coming soon is the Golden Doodle Do’s.

Thank You for your support!

20+ Years of Massage for Wonderful Clients

Examination of the makeup of the human ego and its predictable results.

Down the Rabbit Hole to Disney

Tell Me About It
Chronic Conditions & Life Lessons

Unexpected Blessings Along the Way

The Finance And Business Blog
mindbodymassage1

Managing a in (your clients) home massage business

My Magical Mouse Vacations by Jenny

An Affiliate of Academy Travel